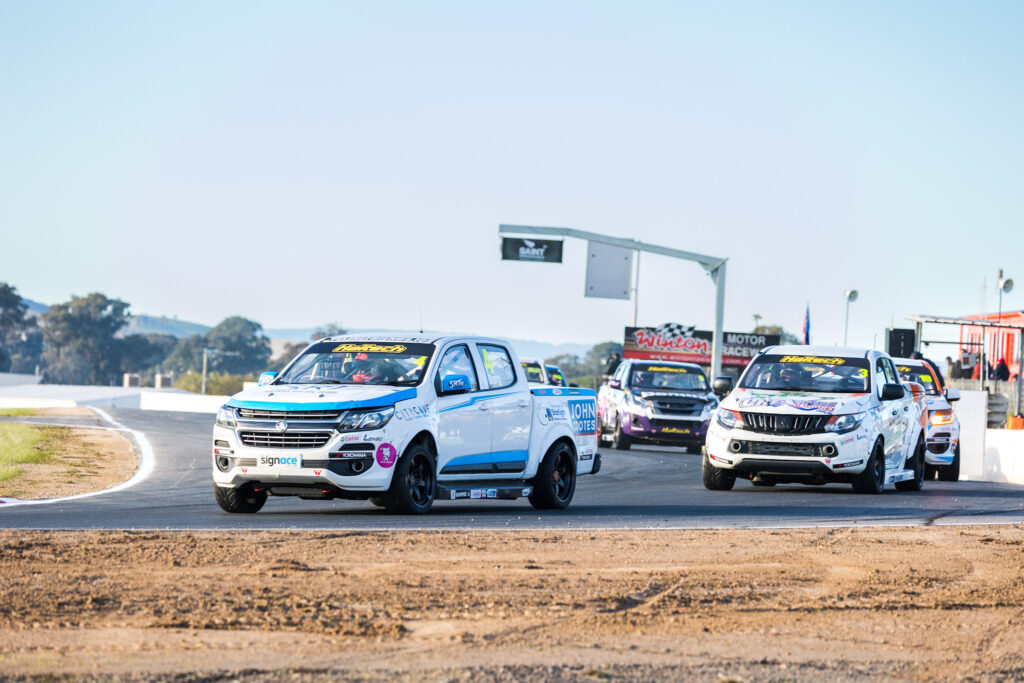 Sieders Racing Team driver Aaron Borg has further extended his advantage at the top of the Haltech V8 SuperUtes Series standings after victory in the opening race at Winton as a start collision took out one of his title rivals.

There was chaos at the start, which was won by Borg in the Sieders Racing Team Holden Colorado as behind, title contender Craig Woods in the Western Sydney Motorsport Toyota Hilux was squeezed on either side by teammate Ben Walsh and the Ryco 24.7 Mitsubishi Triton of Craig Dontas.

As Walsh and Dontas spun just before Turn 1, Woods continued to limp through Turns 1 and 2  Abcor Racing’s Rohan Barry was one of many drivers to take advantage, but he spun his Toyota Hilux exiting the opening complex resulting in a safety car.

The restart occurred on lap 3, but Barry in his haste to move through the field locked up at Turn 1 and spun Craig Jenner in the BT-50.

It was a tight group of four led by Borg at the head of the field as polesitter David Sieders remained 0.2s behind ahead of George Gutierrez in the Go Sunny Solar Holden Colorado and series returnee Gerard Maggs in the World’s Best Technology Ford Ranger.

Maggs’ son Jaidan was also having a strong run in fifth after starting ninth in the World’s Best Technology Mitsubishi Triton, while Walsh had progressed from the back following his off at the beginning of the race to be sixth.

However, Borg held on to take victory by 1.024s from Sieders as Gutierrez rounded out the podium in what started as a difficult weekend when the alternator failed during opening practice.

Peters Motorsport’s Richard Mork placed 11th in his Mazda BT-50 from Jenner, Dontas and Woods, who entered the pits following the start incident, but failed to return until the final lap.

This afternoon’s second race for the Haltech V8 Superutes Series is at 12:25pm AEST featuring an inverted 50 percent grid based on the finishing positions of the opening encounter.