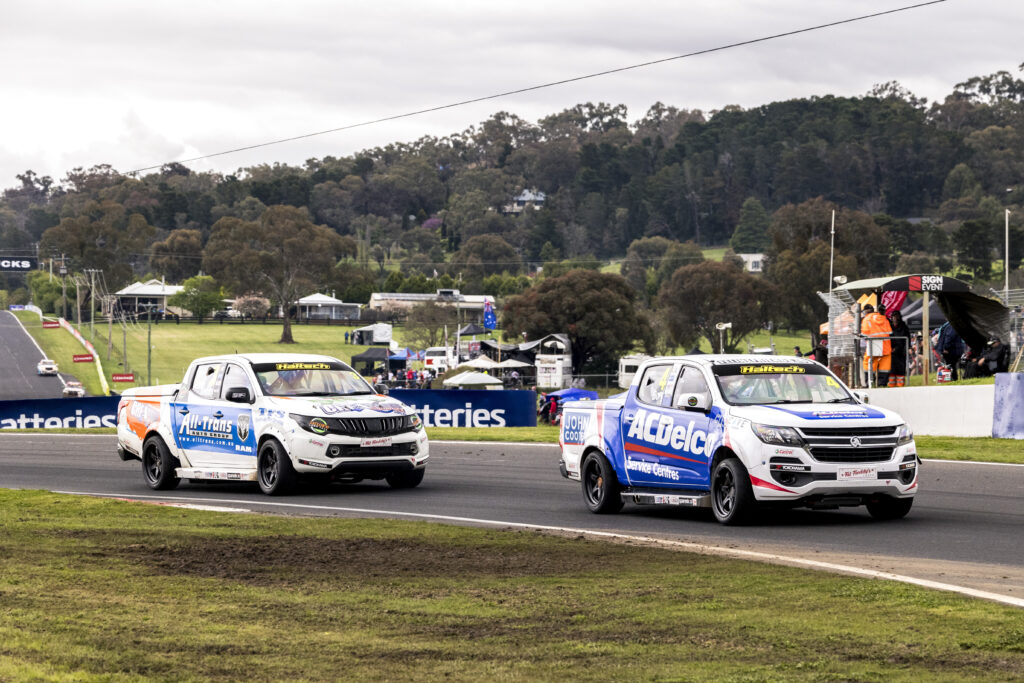 Despite losing the start, ACDelco driver Aaron Borg has extended his series lead by winning the third race for the Haltech V8 SuperUtes Series at Bathurst.

Borg started from pole in the ACDelco Holden Colorado, but it was Race 1 winner Sieders taking the advantage as he led into Hell Corner driving the Sieders Racing Team Mitsubishi Triton.

Sieders and Borg built a margin back to the battling trio led by Walsh as Go Sunny Solar’s George Gutierrez was unable to close on the battle for third in his Holden Colorado.

The battle for third was broken up when Walsh ran wide and had a tank slapper up Mountain Straight, which hindered Woods allowing Dontas to round the Hilux around the outside at Griffins Bend. This proved only temporary as Woods retook the position climbing up towards The Cutting.

In front, Borg was setting up a challenge on Sieders and a successful pass came after the ACDelco Colorado charged down the inside at Griffins Bend.

Rain began to fall at the top of the Mountain during the closing stages, but Borg was able to hold Sieders at bay to make it three different winners from as many races this weekend.

Woods completed the podium as Dontas, Barry, Walsh after another late-race spin at The Chase and Maggs held onto their positions.

Mork had a battle on his hands to maintain a top 10 finish as Bendix Racing’s Dave Casey and Ellexandra Best in the Best Leisure Industries Mitsubishi Triton, however it was the Isuzu D-Max winning out. Best also passed Mork on the line demoting him 10th.

Gutierrez dropped back on the second last lap to finish behind Craig Jenner in his Mazda BT-50 to be classified as the last finisher.

Dean Brooking failed to make the grid in his Gates JKD Racing Team Toyota Hilux after a start line incident in Race 2 this morning. The legendary TAFE crew is working on the Hilux and it should be out for the final event tomorrow.

Race 4 of the Haltech V8 SuperUtes Series at Bathurst is set to kick off the final day of action at 7:25am.