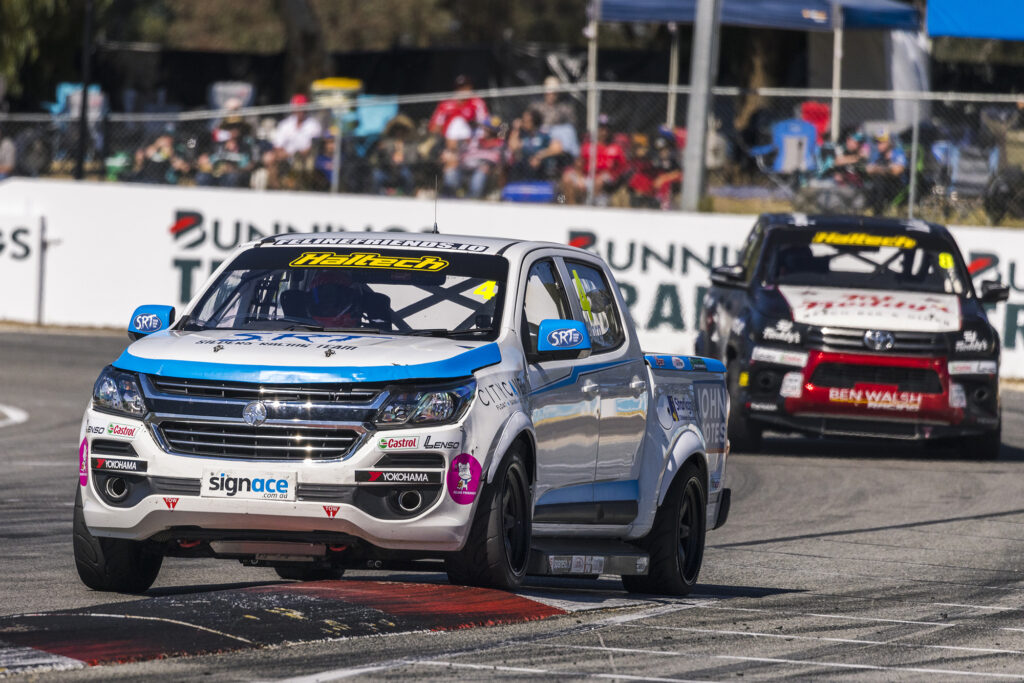 Two out of four isn’t bad for Sieders Racing Team driver Aaron Borg as he completed Round 2 of the Haltech V8 SuperUtes Series at Wanneroo Raceway with his second victory of the weekend and leaves Western Australia with the title lead.

Borg in the Sieders Racing Team Holden Colorado held his main rival from the third race, Ben Walsh in the Western Sydney Motorsport Toyota Hilux at bay during the opening corners where there was drama in the mid-pack.

Ellexandra Best in the Best Leisure Industries Mitsubishi Triton left the circuit at Turn 2, with front-end damage and a flat front-right tyre, though she was able to return to the race.

Meanwhile, Walsh was able to complete what he couldn’t do in Race 3 and pass Borg, as he started the criss-cross at Turn 7 before sliding down the inside at the opening corner.

Scything his way through the field was former series leader and Western Sydney Motorsport driver Craig Woods, who was up to fifth by the race’s mid-point as he chased Sieders Racing Team’s Harry Gray and Abcor Racing’s Rohan Barry.

This battle heated up at Turn 7 on lap 10 when contact was made between Barry and Gray allowing Woods to take the Ranger. Continuing his charge, Woods passed Barry at Turn 6 to climb to third as Gray also attempted to pass but just failed.

Further drama continued at the front of the field, but it started with Best as she left the circuit at Turn 6 and was beached, forcing the introduction of the safety car. However, just after this incident occurred Borg successfully passed for the lead, setting up Walsh out of Turn 7 and completing the manoeuvre along the front straight.

It was fortuitous as the race was completed under safety car as Borg finished clear of Walsh, Woods, Barry and Gray.

Chris Formosa in the Allgate Racing Ford Ranger and Ryco 24.7 Mitsubishi Triton driver Craig Dontas followed in others to make solid gains through a shortened final race for the weekend at Wanneroo Raceway.

In winning his second race of the weekend, Borg took out the round win and leads the series heading to Winton on May 21-22.