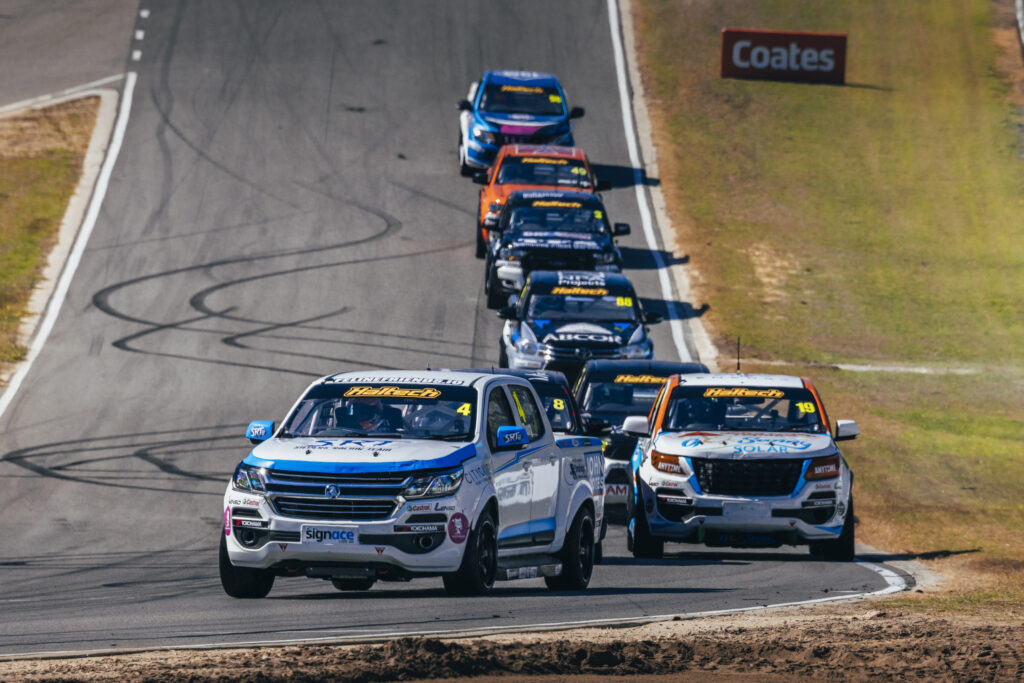 Sieders Racing Team driver Aaron Borg has enhanced his Haltech V8 SuperUtes Series title aspirations by taking victory in the third and penultimate race of the weekend at Wanneroo Raceway.

In an all-Holden Colorado front-row, it was Borg leading through Turn 1 from Go Sunny Solar’s George Gutierrez, as the Western Sydney Motorsport Toyota Hilux duo of Ben Walsh and Craig Woods aimed to move forward.

It didn’t take long as Walsh took second at Turn 7 from Gutierrez and continued his charge towards Borg by setting fastest laps, before it settled down as the race transitioned into a rhythm.

A mover through the pack was Craig Dontas after failing to finish yesterday’s second race due to a spin and collision with David Sieders, work on the Ryco 24.7 Mitsubishi Triton was successful as he progressed seven positions.

Sieders didn’t have the same luck as Dontas as he pitted at the conclusion of the opening lap in his Sieders Racing Team Mitsubishi Triton and failed to return.

Following his maiden race victory yesterday, Gutierrez slowed in his Go Sunny Solar Colorado after being passed by Rohan Barry in the Abcor Racing Toyota Hilux and the Ford Ranger of Harry Gray.

Allgate Racing’s Chris Formosa was another retirement after locking a brake at Turn 7 and getting beached in the sand trap, while Josh Hunter also exited the event as an engine malady dropped him out of contention driving the World’s Best Technology Mitsubishi Triton.

Another to drop out was series leader Woods, as his title rival Borg continued to lead from Walsh, although it closed during the final stanza.

However, Walsh was unable to find a path through leaving Borg to take victory, while behind Barry maintained third from Gray and Dontas in a strong comeback drive.

The final race of the weekend begins at 1:50pm AWST (3:50pm AEST) live on Fox Sports and Kayo.