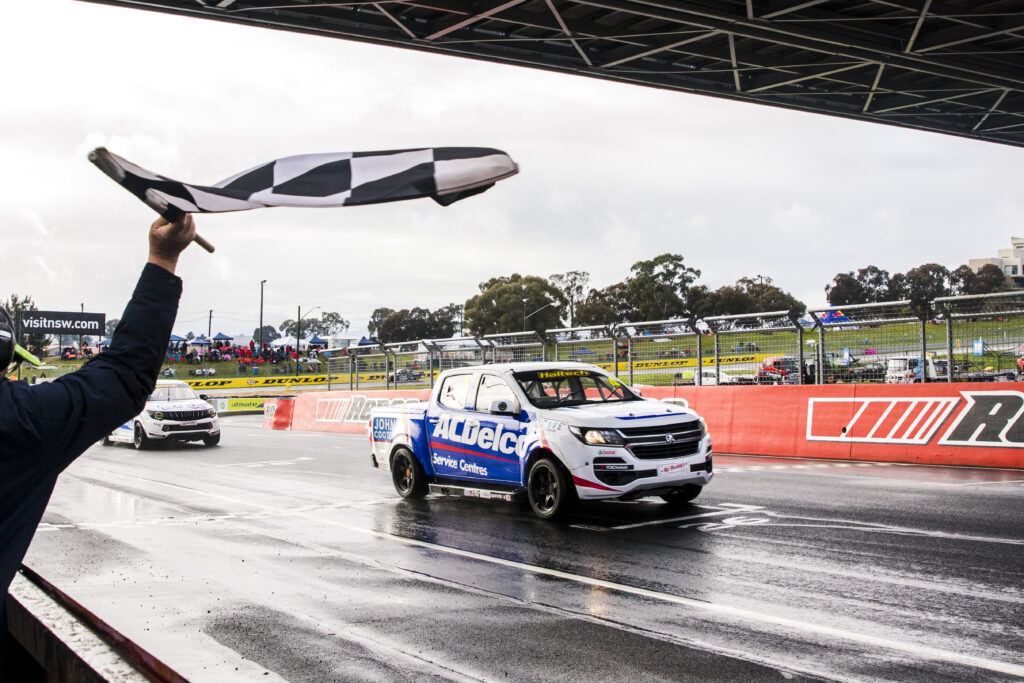 ACDelco Racing’s Aaron Borg has won the final Haltech V8 SuperUtes Series race at Bathurst to secure the round and extend his series lead ahead of the final round at the Gold Coast.

The start of the fourth and final Haltech V8 SuperUtes Series race at Bathurst was delayed as circuit workers completed extra work in response to the heavy rainfall, which occurred during the weekend.

Two reconnaissance laps were completed led by Borg, who was immediately under pressure from Sieders and the Ryco 24.7 Racing Mitsubishi Triton of Craig Dontas when the race started.

Across the top, Borg began to build a margin as Dontas put the pressure on Sieders down Conrod Straight. Behind the lead trio, Western Sydney Motorsport duo Woods and Ben Walsh continued their strong run this weekend, but were struggling to stay in touch as Rohan Barry in the Abcor Racing entry made it three Toyotas in the top five until he spun at Murray’s Corner.

George Gutierrez took advantage driving the Go Sunny Solar Holden Colorado as did the World’s Best Technology Mitsubishi Triton of Jaiden Maggs, but Barry retook a position off the latter just prior to the safety car.

A spin for Dontas exiting Reid Park resulted in the Ryco 24.7 Racing Triton hit the outside wall, which neutralised the race until the chequered flag.

This gave Borg his second victory of the weekend from Sieders as Woods held on from Walsh, Gutierrez, Barry and Maggs.

Behind, a solid run from Dave Casey in the Bendix Racing Isuzu D-Max resulted in eighth, while Ellexandra Best driving the Best Leisure Industries Triton won the weekend-long battle with the City Rural Insurance Brokers Mazda BT-50 of Richard Mork to complete the 10.

Rounding out the field were Craig Jenner in his BT-50 and Dean Brooking, who’s crew combined with the TAFE team to return the Gates JKD Racing Team Hilux to the track last night following the start incident during Race 2 yesterday morning.

The final round of the Haltech V8 SuperUtes Series will take place on the streets of the Gold Coast on October 28-30.