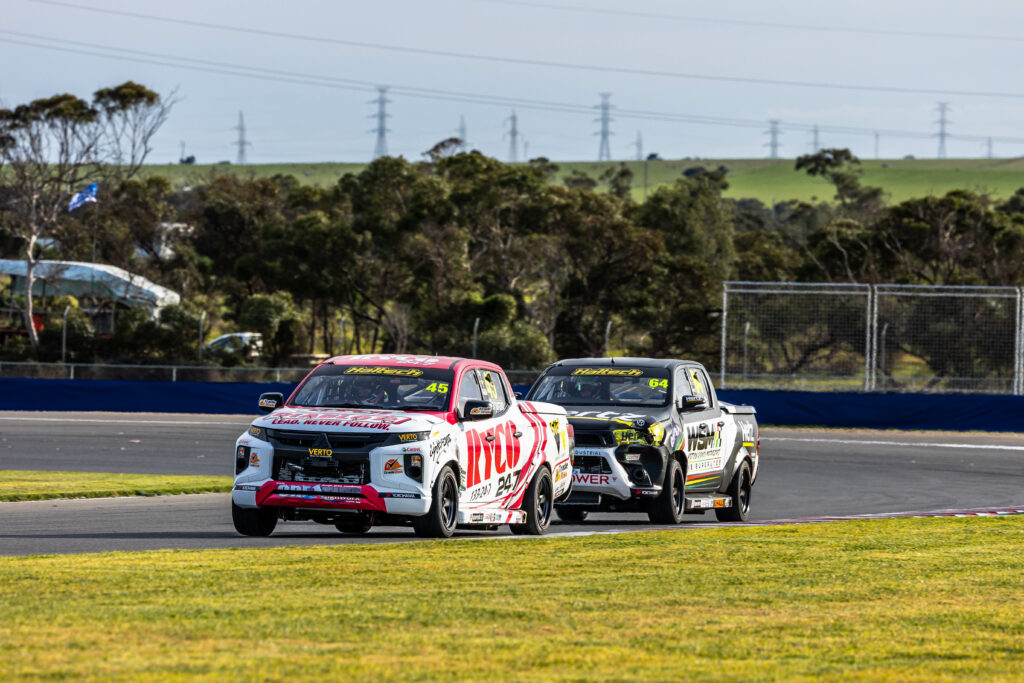 Ryco 24.7’s Adam Marjoram has taken his maiden Haltech V8 SuperUtes victory in Race 2 at The Bend after holding off a late charge from series leader Aaron Borg in what was a masterful recovery following this morning’s failure to start.

Marjoram started fourth, but moved his way quickly into second, then into a lead he failed to lose as Borg just fell short in hunting him down from the back after a fuel pressure problem ended Race 1 before it started and debutant Ryan Gilroy scored his maiden podium.

The top seven finishing positions from Race 1 were inverted to make the grid for the second event placing the Sieders Racing Team Ford Ranger of Gilroy on pole alongside Rohan Barry’s Abcor Racing Toyota Hilux.

Starting from seventh, David Sieders made the best start in the field to be fourth as ahead, Barry lost failed to get away as well as Gilroy and crossed the track to block the Western Sydney Motorsport Toyota Hilux of Craig Woods, who ended up on the grass.

A spin for Dean Brooking in the Gates JKD Motorsport Toyota Hilux exiting Turn 4 dropped him out of contention, while following a disappointing end to the opening encounter George Gutierrez was charging through the field in the Go Sunny Solar Holden Colorado. But this ended after replicating his lock up at the penultimate corner in the first race, but this time he was unable to save it and spun.

At the front, Marjoram took control from Gilroy as Woods quickly joined and also passed the Ford Ranger on lap 5 to turn his attention to the leading Ryco 24.7 Mitsubishi Triton.

Series leader Aaron Borg was making good progress to be fourth after failing to start Race 1 in the ACDelco Holden Colorado and was reeling in the leaders.

Despite spinning off, Gutierrez demonstrated the pace he had onboard his similar Colorado by breaking the lap record at his home event back in eighth.

In fact, Gutierrez caught a train led by Barry, which also contained opening race winner Sieders in the Sieders Racing Team Mitsubishi Triton and the second Western Sydney Motorsport Toyota Hilux of Ben Walsh. Sieders moved through at Turn 1 after a Barry mistake to gap the fighting trio as Gutierrez moved through on Walsh.

At the front, it was soon turning into a four-way fight as Borg quickly caught the back of Gilroy, who in turn was placing pressure on Woods, but Marjoram was now 0.848s ahead. Woods made a mistake around the back of the circuit to drop position to Gilroy and Borg.

Borg continued his run to pass Gilroy for second and had Marjoram in his sights, but fell short by just 0.330s as he set a new lap record of 2m 12.493s in his efforts.

Two races continue the Haltech V8 SuperUtes action tomorrow concluding Round 4, with the first starting at 9am AEST (8:30am local time).

PrevPreviousDavid Sieders wins opening race at The Bend, as series leader fails to start
NextLoose kerb leads to non-result in Race 3Next