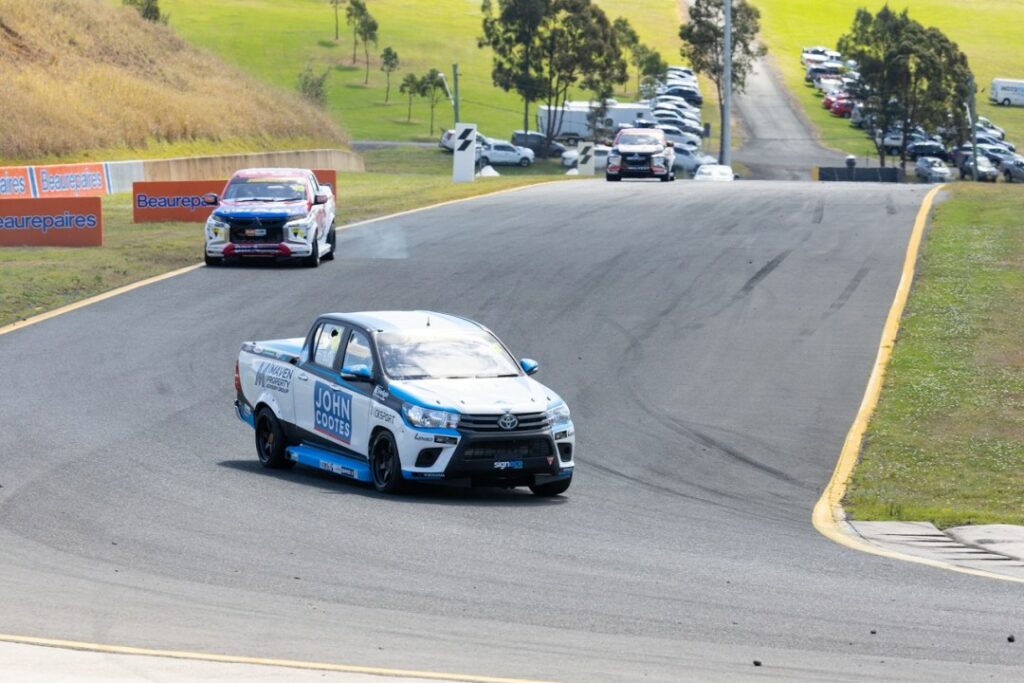 Aaron Borg has moved into the lead of the Haltech V8 SuperUte Series after winning both today’s races at Sydney Motorsport Park to secure the overall win in round two of the series.

In the second race, which featured a top-six reverse-grid format, Borg capitalised on a robust battle between Ryal Harris and the Team Triton entries of David Sieders and Cameron Crick.

Sieders suffered a flat tyre after contact with Harris at Corporate Hill and was forced into an unscheduled pit stop; a couple of laps later, Crick and Harris came into contact at the same corner, with both Utes spinning precariously across the track. Damage to Crick’s Triton forced him into retirement, while Harris was able to resume after a lengthy delay. Borg was ideally positioned to take the win ahead of Matt McLean and a delighted Jaiden Maggs.

“That was a fun race, it was great to have the utes going back to the good old days of rubbing and a bit of rough and tumble. I managed to avoid the crashes, especially the one at Corporate Hill,” Borg said.

The combined points from the first two races saw Borg starting on pole ahead of McLean, but the debutant’s chances were dealt a blow before the start lights were even extinguished, thanks to a differential problem.

Borg assumed the lead but in the closing stages, he was forced to fend off a hard-charging Sieders, who had opted for an alternate tyre strategy. Crick progressed from ninth on the grid to third, while fourth place for Ryal Harris was enough for him to finish second for the weekend.

“It was a good pressure race between Dave and I,” Borg said.

“He was very fast at the end and I couldn’t afford to make any mistakes. We learned some lessons about tyre strategy which we’ll implement for the next round in a couple of weeks.

“Overall, it was a great weekend for the category, we showed everyone how entertaining SuperUte racing can be.”

Harris was surprised to finish on the podium after a weekend plagued by gearbox problems.

“The Utes needed a weekend of exciting racing and we certainly gave that to the fans,” he said.

“In the last race, I had no fourth gear at all so it’s a bit of a miracle I still managed to finish second for the weekend. Unfortunately, we’ve given away a lot of points to Aaron in the championship.”

Sieders, making his first start in the new V8 era of SuperUtes, was pleased to finish on the podium.

“The car is still a work in progress but in the third race, we had the chance to show its potential,” Sieders said.

“We had a tyre advantage over Aaron because he put his fresh tyres on the rear, where we put ours on the right-hand side. I was quicker at the end but ran out of laps to get past him.”

The next round of the Haltech V8 SuperUtes will be held at Sydney Motorsport Park in a fortnight.