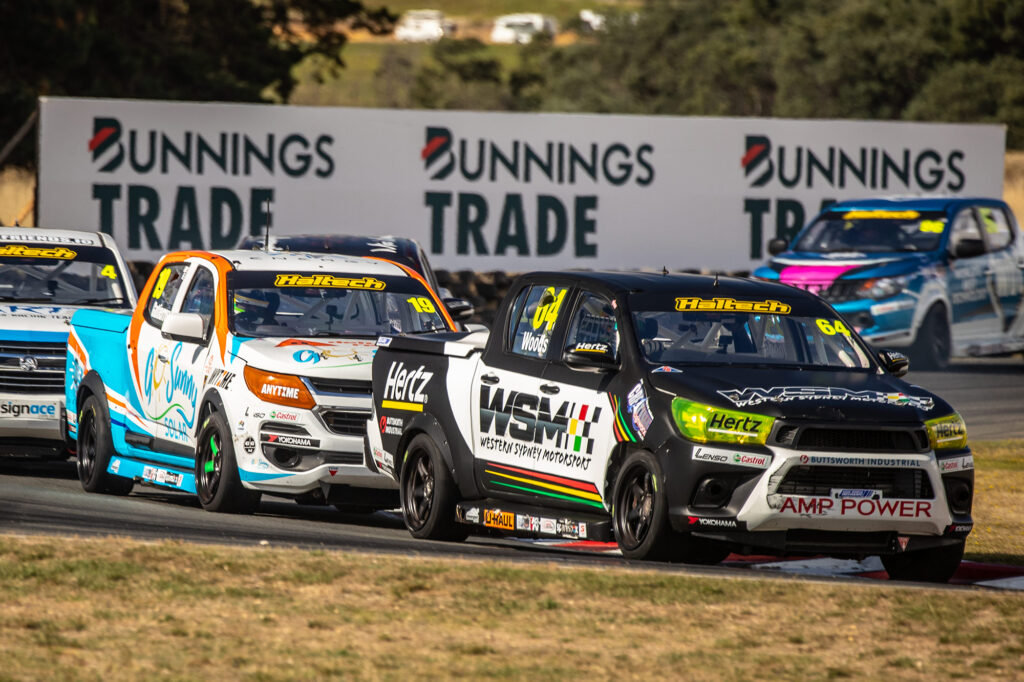 Craig Woods takes series lead after opening round in Tasmania

Craig Woods has left the opening round of the Haltech V8 SuperUtes Series as the leader after securing victory in today’s racing at Symmons Plains Raceway in Tasmania.

The Toyota Hilux driver won Race 3 before an incident and a red flag caused the final race to be cancelled.

While the SuperUtes field was disappointed with missing the opportunity to compete in the final race, Woods was pleased with securing an early series lead.

“A pretty good weekend. We ran away with Race 3, got out early and managed the gap and fastest lap,” said Woods.

“Overall, we’ve bumped out in the championship lead which is awesome. It’s great to repay the boys and girls who have set the team up in eight weeks.”

At the start of Race 3, Dontas got the jump and led the opening salvos.

A slow starting Wood dropped to third initially but made his way to the lead with a bold move at the hairpin, running Dontas high on the exit of the famous 180 degree corner in what was an edgy moment.

Guitierrez finished third and survived a wild moment on the first lap of the race when he made contact with Woods at high-speed down the back straight.

That third place was only decided by 0.01s after a side-by-side finish with Aaron Borg, who had shadowed the leading trio for the entire race.

Jeromy Gray was fifth from Jaiden Maggs and local driver Layton Barker who endured a wild off track moment at the first corner and dropped to last. He fought his way back through the pack to claim seventh.

The fourth and final race of the weekend was stopped barely after it started. Barker and Gray collided on the straight down to the hairpin, pushing Barker hard into the armco wall and instantly out of the race.

Richard Mork was also an innocent bystander, slowing to avoid the incident only to be slammed into by Rohan Barry, who was blinded by the incident up ahead by Mork’s car.

The race was red flagged while the barriers were repaired and, due to time restrictions, the event was ultimately called after one more lap behind the Safety Car.

The non-race meant that Woods had done enough to secure the round win and an early series lead ahead of Dontas, Borg, the consistent Gutierrez and Maggs.

The next round of the Haltech V8 SuperUtes Series will be held at Waneroo Raceway near Perth next month.