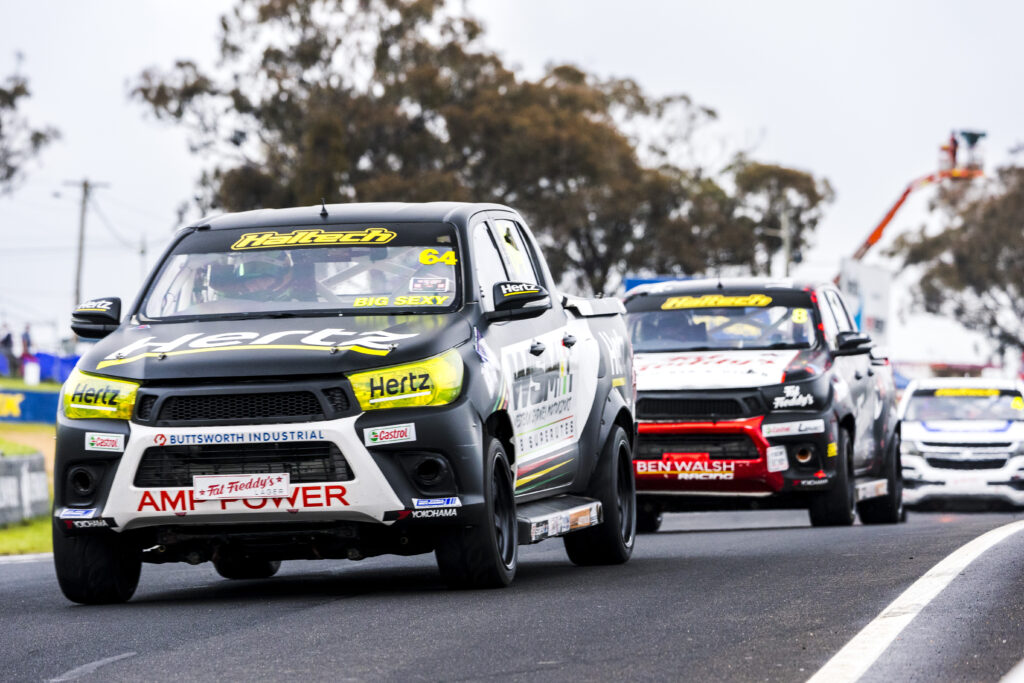 Craig Woods wins battle of the teammates in Race 2

Western Sydney Motorsport’s Craig Woods has defeated teammate Ben Walsh after an entertaining battle between the pair during Race 3 of the Haltech V8 SuperUtes Series at Bathurst.

Woods completed the race defining pass on Walsh during the penultimate lap at The Chase as series leader Aaron Borg secured third and extended his margin.

At the start there was contact as a few drivers made a slow start resulting in a concertina leaving Dean Brooking in the JKD Gates Racing Team Toyota Hilux being spun into the outside wall after tangling with Ellexandra Best.

The safety car came out to neutralise the field while Brooking’s Hilux was removed and the area cleaned leaving Craig Dontas leading in the Ryco 24.7 Racing Mitsubishi Hilux from the two Western Sydney Motorsport Toyotas off Woods and Walsh, while series leader Borg held fourth in the ACDelco Holden Colorado.

On the restart, Woods immediately took the lead at Hell Corner as Dontas dropped position to Walsh, Borg and Gutierrez on Mountain Straight after the Fat Freddy’s Lager Hilux move slightly across resulting in contact between the pair.

Rain began to fall, as conditions were relatively dry and a line was forming, but the battle between the Western Sydney Motorsport teammates was heating up after dropping Borg.

Walsh took the lead down Conrod Straight, but Woods kept the pressure on as Dontas gained one position back on Gutierrez, with Sieders also moving past Mork and Barry, the latter entering pit lane.

Gutierrez re-took fifth place up Mountain Straight, but Sieders was fast closing on the battling duo in front.

Walsh continued to hold off Woods, as Borg ran a lonely third from Gutierrez and a storming Sieders after demoting Dontas to sixth.

After making a good run out of Forrest’s Elbow and down Conrod Straight, Woods took the lead from Walsh at The Chase. Woods managed to withstand an attack at Murray’s Corner and it proved pivotal as he took the win from Walsh, Borg, Sieders, Gutierrez, Dontas and Jaiden Maggs in the World’s Best Technology Triton.

Mork, the sole-Isuzu D-Max of Bendix Racing’s Dave Casey and Craig Jenner in the second BT-50 completed the top 10.