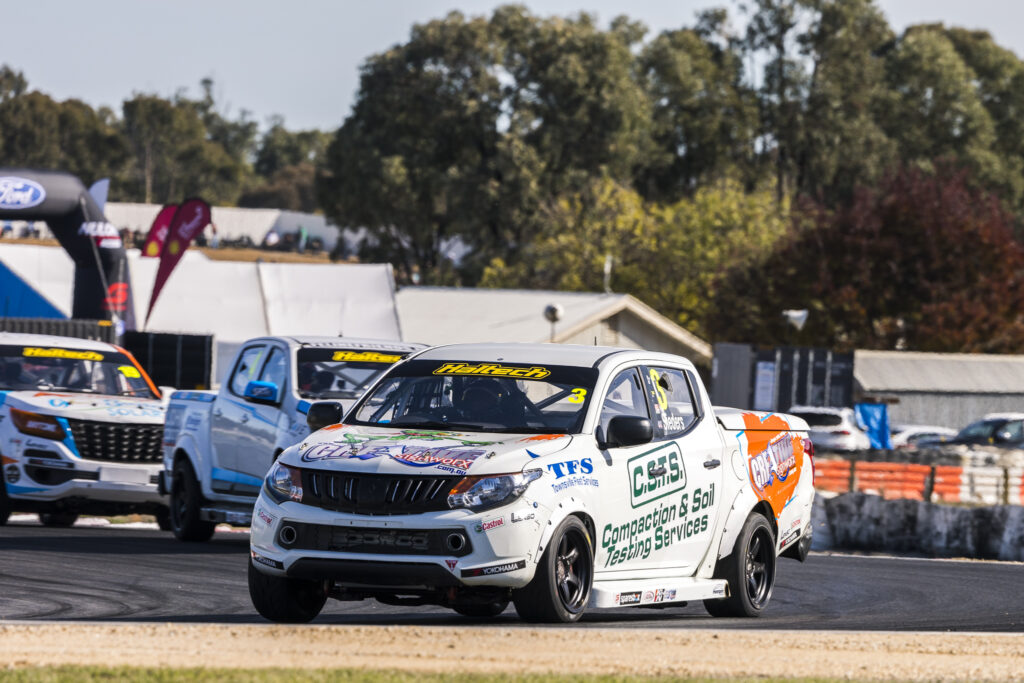 David Sieders has doubled up by taking Race 3 of the Haltech V8 SuperUtes Series at Winton in what was an interrupted affair following an opening lap incident.

From pole, Race 2 winner Sieders made the best start in the Sieders Racing Team Mitsubishi Triton, quickly followed by stablemate Aaron Borg in his Holden Colorado as George Gutierrez got away poorly and dropped to third entering Turn 1.

World’s Best Technology Mitsubishi Triton driver Jaidan Maggs attempted to also take advantage around the outside. He successfully did so, however Gutierrez clipped the inside of the Turn 2 kerb and tapped Maggs to spin him in front of the field.

An unsighted Craig Dontas was unable to avoid the stricken Triton, with the impact sending the Ryco 24.7 Mitsubishi onto two-wheels with both entries damaged.

Also involved was local driver Ellexandra Best as she clipped the World’s Best Technology Triton in her Best Leisure Industries example, though she was able to re-join two laps down after visiting pit lane.

More action was to come on lap 6 at Turn 11 when Hilux pair Ben Walsh and Gates JKD Racing Team’s Dean Brooking collided resulting in the Western Sydney Motorsport entry spinning into the in-field.

At the head of the field, Borg had no answer as the margin at the chequered flag was 0.644s as Gutierrez took third from Maggs, Barry, Western Sydney Motorsport’s Craig Woods, Brooking, Bendix Isuzu D-Max driver David Casey, Craig Jenner in his Mazda BT-50 and Walsh.

Best was two laps down in 11th and was the last competitor finish, with Maggs and Dontas not continuing, while Peters Motorsport’s Richard Mork failed to take the start.

The final race for Round 3 of the Haltech V8 SuperUtes Series at Winton takes place at 1:50pm AEST.