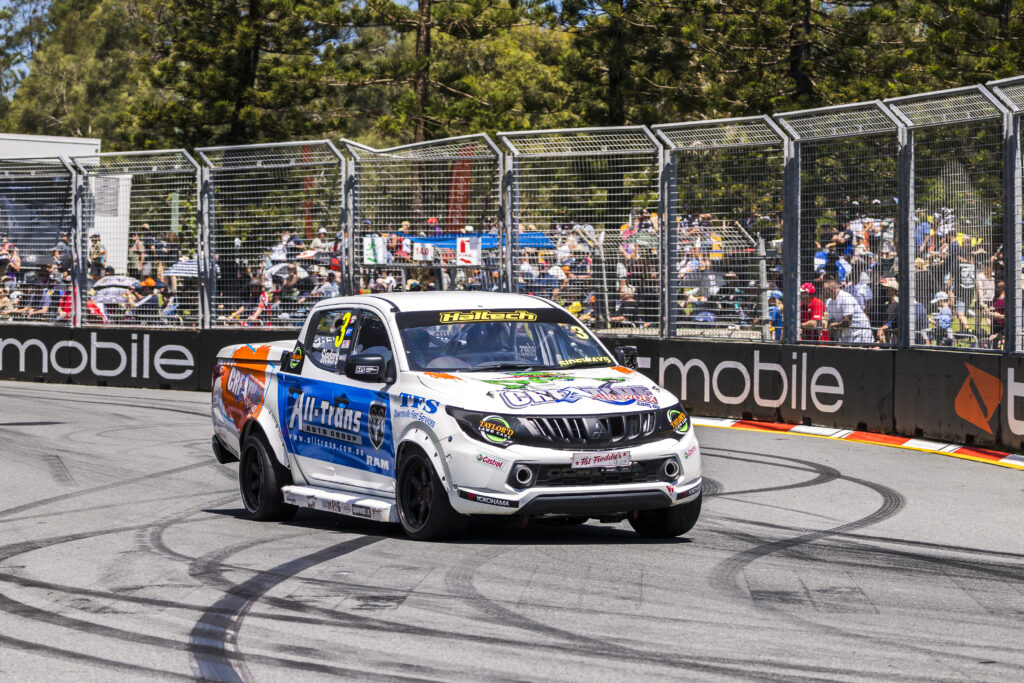 A dynamite start and a robust late-race defence by David “Sideways” Sieders has handed the veteran Race 2 victory on the Gold Coast.

After the top six were inverted providing Rohan “Silver Fox” Barry in the Abcor Racing Toyota Hilux and the Go Sunny Solar Holden Colorado of the George “El Gringo” Guitierrez a front-row berth, but it was Sieders splitting the pair in his Sieders Racing Team Mitsubishi Triton.

Sieders built a gap from Barry as Harris, Woods and Borg put the pressure on the Abcor Racing Toyota Hilux. The reigning series winner managed to get through at Turn 4, but when Wood attempted to do likewise at the back end of the circuit there was contact, with the resultant damage dropping the duo out of contention.

Gutierrez meanwhile was struggling to after being forced to pit with a throttle sensor problem, which put him multiple laps down.

With Harris now free to attack Sieders, the race was building to an exciting climax on the final lap. The Super Butcher Ranger driver was determined to add another victory to his tally and attempted a pass around the outside at Turn 11, but Sieders ran wide forcing Harris into the wall.

The resulting damage to the Ranger dropped him out of contention leaving Sieders to win from Harris and Ben “The Jet” Walsh, who recovered from an incident at Turn 13 to round out the podium in the Fat Freddy’s Lager Toyota Hilux.

Rounding out the top 10 were Ellexandra “NotZak” Best in the Best Leisure Industries Mitsubishi Triton, the World’s Best Technology example of Jaiden “Boy Wonder” Maggs and the recovering Harris.

Dean “The Professor” Brooking was 11th in his repaired Gates JKD Racing Team Toyota Hilux ahead of Woods, Barry and Gutierrez.

Two more races will follow tomorrow as Borg’s second just about puts the title out of reach. The Haltech V8 SuperUtes Series action continues at 9:25am AEST (10:25am AEDT) tomorrow.