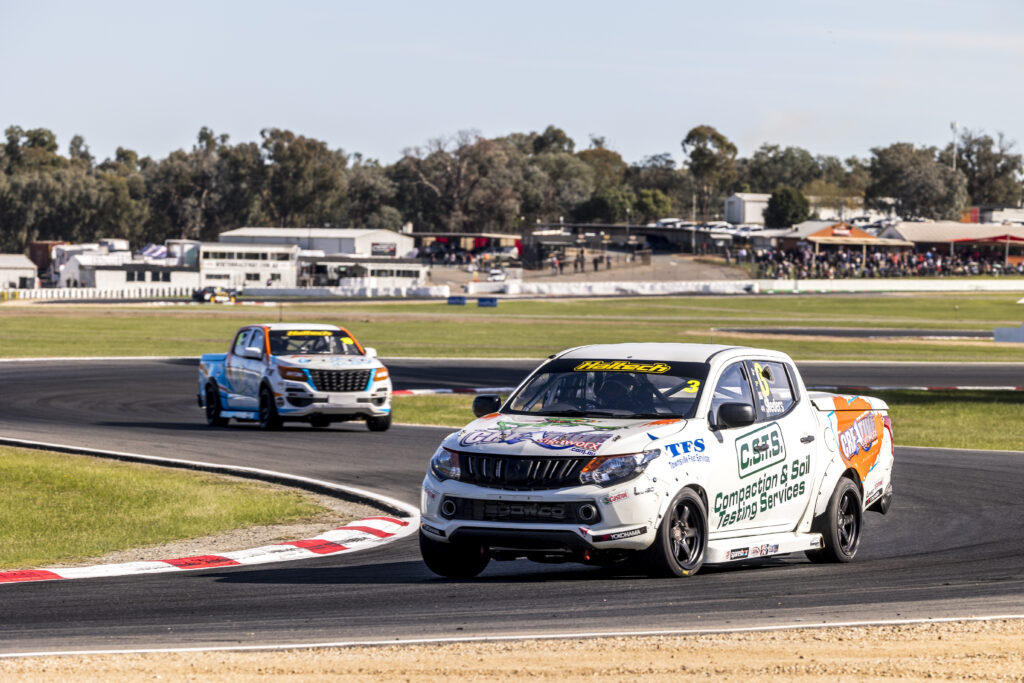 Flipping 50 percent of the grid put Dean Brooking on pole in the Gates JKD Racing Team Toyota Hilux, but it was the Bendix Racing Isuzu D-Max alongside of Dave Casey winning the start and leading into Turn 1.

By this stage, a rocket start from Sieders immediately placed him in the box seat, moving to fourth as he gradually moved forward to take the lead at the end of the first lap.

Brooking meanwhile spun exiting Turn 9, further aiding this morning’s frontrunners as Sieders set-up a successful attack on Casey and the Go Sunny Solar Holden Colorado of George Gutierrez also made position to follow the Triton through into second.

Series leader Aaron Borg climbed to fourth, but was able to pass Casey and pursue the two leaders.

West Sydney Motorsport’s Ben Walsh went off at the Turn 5 sweeper on lap 2, as teammate Craig Woods charged through the first to be seventh from the back after a race to forget this morning.

The pressure was on Sieders as the two Colorados of Gutierrez and Borg increased their challenge for the lead.

This lasted for a lap until Gutierrez and Borg began to swap positions, leaving Sieders to build a race winning advantage.

However, a right front puncture dropped Borg out of contention leaving Gutierrez to take a secure second, but the battle for the minors was heated.

Abcor Racing’s Rohan Barry now took third, but was under pressure from the experienced Craig Dontas driving the Ryco 24.7 Mitsubishi Triton as behind another battle involving Gerard Maggs in the World’s Best Technology Ford Ranger, Woods and Walsh raged.

In the end, Sieders took a convincing 2.572s victory from Gutierrez as Barry rounded out the podium, just holding out Dontas and Maggs.

Walsh took sixth from Jaidan Maggs in the World’s Best Technology Mitsubishi Triton and Woods managed to take eighth, despite a collision on the final lap as he was re-entering the circuit at Turn 7 resulting in a flat tyre.

Borg lost a lap in the pits and Richard Mork pulled in to the pits at the completion of the first circuit.

Two races complete Round 3 of the Haltech V8 SuperUtes Series at Winton, starting at 8:35am AEST tomorrow.