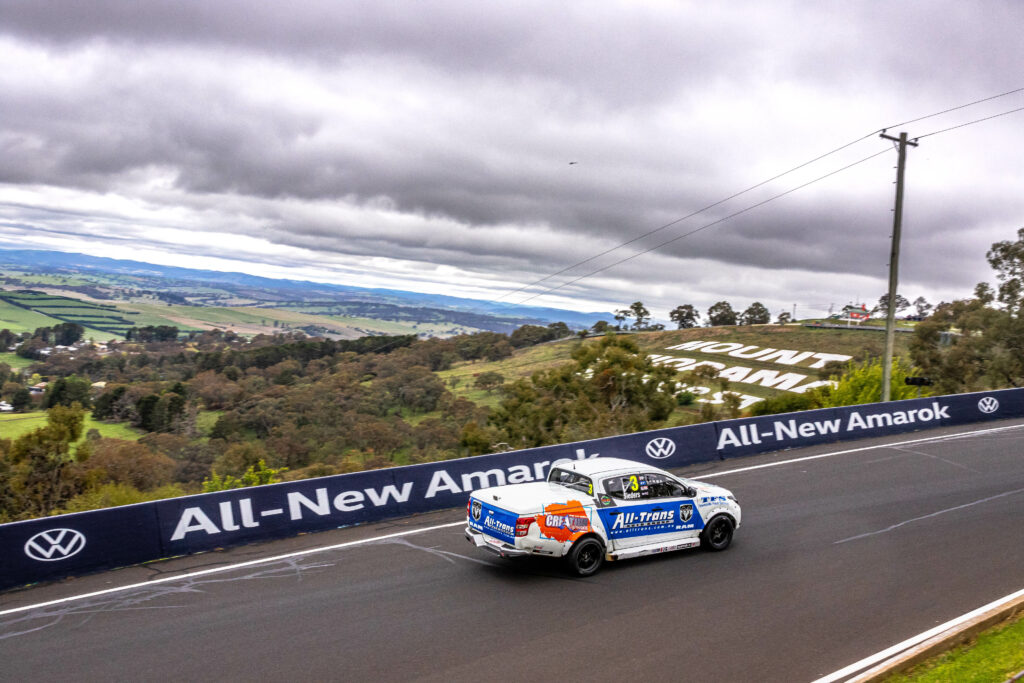 Sieders Racing Team’s David Sieders has continued his strong recent form to take victory in the opening race for the Haltech V8 SuperUtes Series at Bathurst.

Sieders overtook series leader Aaron Borg in the ACDelco Holden Colorado on the opening lap and was never headed as Craig Dontas won an entertaining battle for the final step on the podium driving the Ryco 24.7 Racing Mitsubishi Triton.

Dontas made the best jump at the start to head to Hell Corner around the outside of Borg, but the series leader led the field up Mountain Straight as behind Sieders jostled his way to second.

Behind Dontas in third were the two Western Sydney Motorsport Toyotas of Craig Woods and Ben Walsh to complete the top five as George Gutierrez in the Go Sunny Solar Holden Colorado was holding on to the lead quintet.

The only incident on the opening lap was Jaidan Maggs stalling off the start in the World’s Best Technology Mitsubishi Triton.

Sieders took his opportunity along Conrod Straight to snatch the lead from Borg as behind Walsh also replicated the same overtake on teammate Woods to demote him to fifth at The Chase.

Walsh tried to replicate the same move on the next lap on Dontas, but just failed to pull it off.

Unrelenting was the pressure from Walsh as after dropping back for two laps he mounted another attack on Dontas as teammate Woods also joined the battle, with Gutierrez dropping 4s behind the podium contest.

Sieders maintained a comfortable margin back to Borg as the duo continued to streak away from Dontas as he struggled to hold on from Walsh and Woods.

Behind Gutierrez, Rohan Barry in the Abcor Racing Toyota Hilux was enjoying a close battle with the City Rural Insurance Brokers Mazda BT-50 of Richard Mork, who was having one of his strongest performances of the season so far.

In an impressive drive, Maggs had clawed his way back inside the top 10 after displacing the Best Leisure Industries Mitsubishi Triton of Ellexandra Best for ninth.

At the beginning of the last lap, Dontas had broken away from the Western Sydney Motorsport pair after the Toyota Hilux duo continued to swap positions, but by the top of the Mountain the Ryco 24.7 Racing Triton was forced to defend.

Sieders secured victory from Borg as Dontas held on to round out the podium, with Walsh following after Woods went off at The Chase, but he recovered to complete the top five.

Behind, Gutierrez was 5s behind in sixth from Barry, Mork, Maggs and Best.

Dave Casey in the Bendix Isuzu D-Max, the Gates JKD Racing Team Hilux of Dean Brooking and Craig Jenner in the second Mazda BT-50 rounded out the remainder of the field.

The Haltech V8 SuperUtes Series will next race tomorrow twice at 8:10am and 2:20pm, but if trackside an autograph session will take place at 11:30am today, in addition to the pit stop challenge at 2pm.