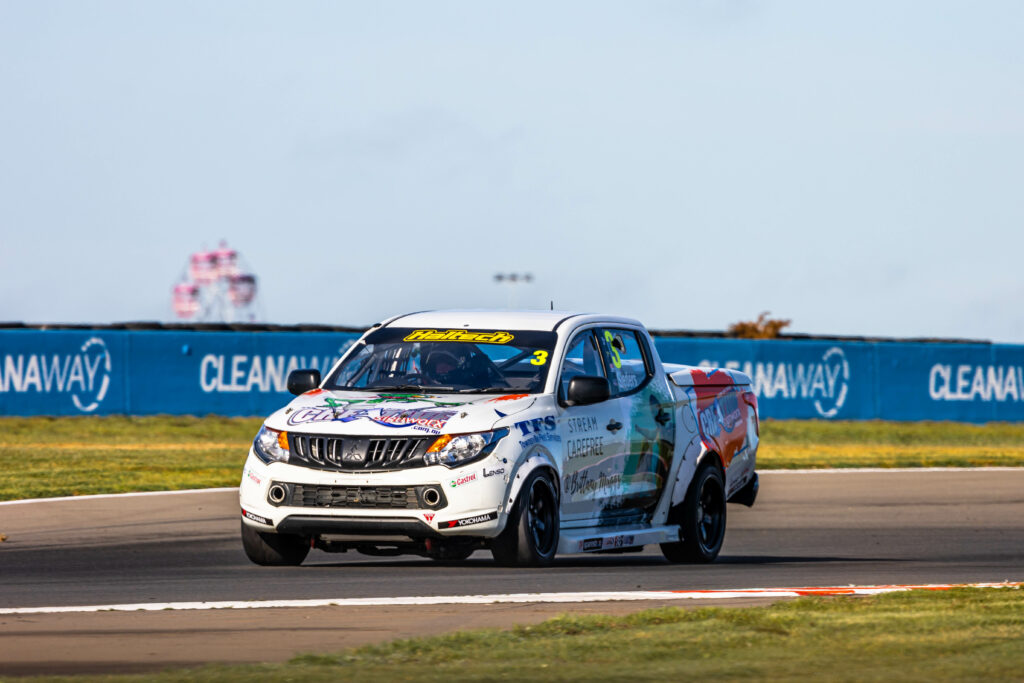 Sieders fought off the advances of hometown racer George Gutierrez, who slowed during the final lap in his Go Sunny Solar Holden Colorado to drop behind Western Sydney Motorsport’s Ben Walsh on the line.

There was drama even before the opening race started as Western Sydney Motorsport’s Craig Woods was excluded from qualifying due to running cooling ducts not allowed under regulations demoting his Toyota Hilux to 15th.

However, another there was further trouble as Borg failed to make the start after stopping at the back of the grid in his ACDelco Sieders Racing Team Holden Colorado due to losing fuel pressure.

It was Sieders in his Mitsubishi Triton winning the start from the second row and using the clear space where stablemate Borg was supposed to start from to his advantage to pass polesitter Adam Marjoram before Turn 1.

There was chaos behind as debutant Ryan Gilroy in the Ford Ranger of the Sieders Racing Team and the Gates JKD Racing Team Toyota Hilux of Dean Brooking tangled exiting Turn 4.

Sieders continued to extend his lead throughout the event as Marjoram held onto second for much of the event until dropping a wheel in the dirt allowing the Go Sunny Solar Holden Colorado of Gutierrez, plus Walsh’s Western Sydney Motorsport Hilux and hard charger Rohan Barry in the Abcor Racing Toyota up a position.

The Hilux pair engaged in a tight battle for the final podium spot, with Super Sub Marjoram in the Ryco 24.7 Racing Mitsubishi Triton 2.3s in arrears completing the top five.

But after snatching third from Walsh, it was Barry making the mistake by dropping a rear wheel off and spinning into the in-field as he only dropped back to sixth.

Up front, Gutierrez had closed on Sieders and nearly spun off in his pursuit at the penultimate corner on lap 7 when he locked up, which gave the leader a margin he held until the end.

There was a dramatic finish after Gutierrez slowed within sight of the flag, allowing Walsh into second as the Colorado held onto third.

The battle for fourth was decided in favour of Marjoram, although Woods pressed hard as he completed a swift comeback following his penalty in qualifying to round out the top five.

Round 4 of the Haltech V8 SuperUtes Series at The Bend Motorsport Park continues with Race 2 this afternoon at 3pm AEST (2:30pm local time).