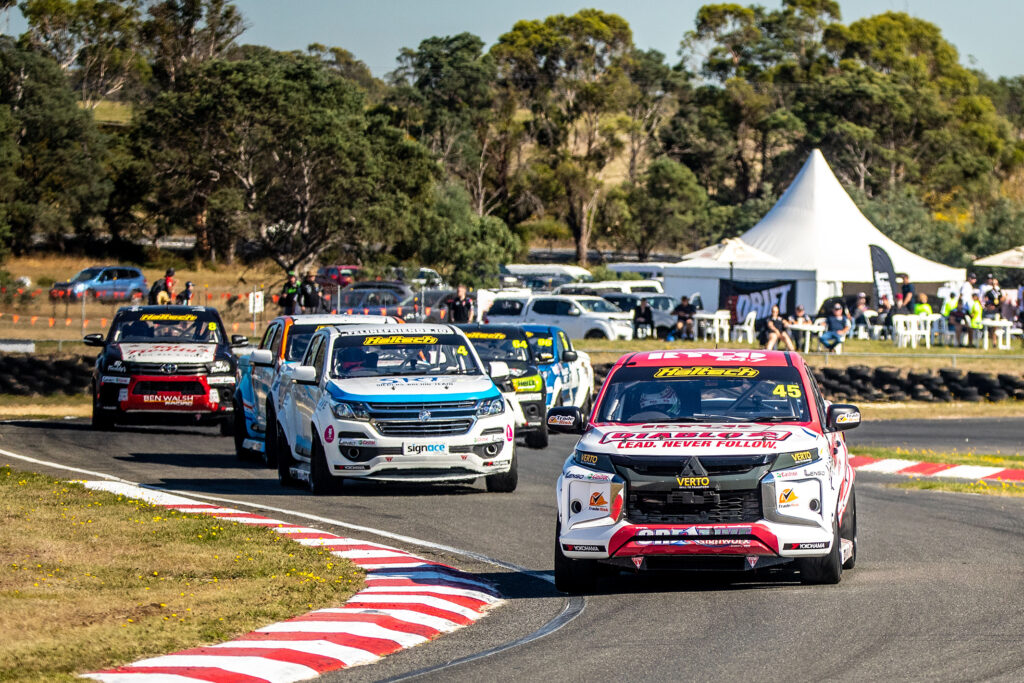 Craig Dontas and Craig Woods have shared the spoils in the opening race day of the Haltech V8 SuperUtes Series at Symmons Plains Raceway today.

After Woods claimed pole yesterday, it was Dontas who battled through to the lead to take a commanding, yet opportune victory.

Toyota Hilux driver Aaron Borg held the lead initially, before Woods made a lunge that he made stick in the opening laps, only for Dontas to take advantage of Woods’ slower run and hold a lead he would not surrender.

Dontas was pleased that he secured the first win of the year after “dusting off the cobwebs” in practice and qualifying yesterday.

“It was a pretty good day for me and it was a massive confidence builder,” said Dontas.

“I fought off my team-mate (Borg) and it was great to get the win and tick the box.”

Dontas’ win was not a given, though. Woods tried a move on Dontas at the hairpin shortly after, but copped a serious dose of oversteer on the exit, losing positions to Borg, who ultimately took second, while Woods eventually coming home in third place.

In the half points reverse grid Race 2, it was Woods who fought his way through the field the best in a clean, fair fight.

“It was a pretty eventual day. I didn’t get the start in Race 1 that I wanted and dropped back,” said Woods.

“We started from grid four for the reverse grid race, and I got a great start, pushed through past Walsh and I was able to hold it.

“It’s a big ups to the team who have worked tirelessly to get this result.”

Rohan Barry (Toyota Hilux) found the gravel trap and caused a brief Safety Car period, while Ellexandra Best was forced out with a mechanical problem.

The final day of the opening round of the Haltech V8 SuperUtes Series will be held tomorrow with two races at 11:25am and 2:55pm AEDT.

All races will be shown live and uninterrupted on Foxtel and Kayo.