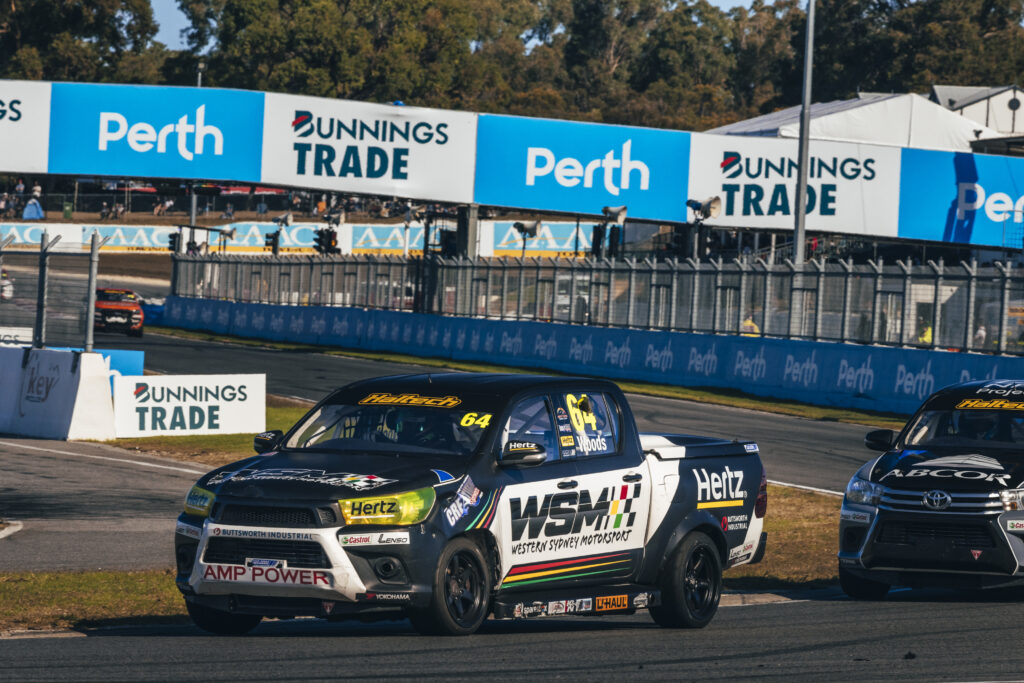 Former series leader aims to take back advantage at Winton

It was a luckless trip to Perth for Craig Woods as he lost the Haltech V8 SuperUtes Series lead, but he is targeting a return to the top at Winton

It was a luckless trip to Perth for Craig Woods as he lost the Haltech V8 SuperUtes Series lead, but he is targeting a return to the top at Winton.

Woods won the opening round of the series at Symmons Plains in what was the first event for Western Sydney Motorsport in the category, a rapid six week journey to prepare and test its two entries.

“It’s been a great start with the team moving solo and doing everything in-house, it’s really worked out well so far,” Woods remarked.

“We knew we were onto something special as the pre-season testing we did two weeks before the car was looking pretty good and the changes we made it responded to in a positive way.

“We went to Symmons Plains with confidence, but we didn’t think we were going to have that much pace and that much tyre longevity either. We thought we’d have to give up one to have the other, but we managed to have both.

“It’s pretty awesome to think in the middle of February we got the cars and did the prep for the year, so it’s been an unreal start.”

Due to the recent complications of the worldwide pandemic, Woods’ plans to go standalone in the Haltech V8 SuperUtes Series with Western Sydney Motorsport were delayed, but it’s started in success as he paid tribute to his crew.

“It was in the pipeline at the start of last year, we just wanted to be more responsible for our results,” Woods explained.

“The guys from about mid-February until Sydney Motorsport Park and Symmons Plains were burning the midnight oil four days a week to get both the V8 SuperUtes as well as our Aussie Racing Cars ready. To be that competitive as well it was a massive effort.”

Following a luckless trip to Perth where tyre and brake problems afflicted Woods, who redeemed the weekend with second in the finale dropped him out of the lead of the title race.

The margin to current series leader Aaron Borg is just 13-points heading to Winton on May 20-22 where Woods expects to regain the advantage.

“I’ve dropped behind Aaron, but I’m confidence as I am in the package as I was heading to Perth,” said Woods.

“If I secure pole, I’m seven or eight points away from the lead again, so I’m more than confident that halfway through the meeting I’ll be back in the series lead with the crew and car I’ve got.”