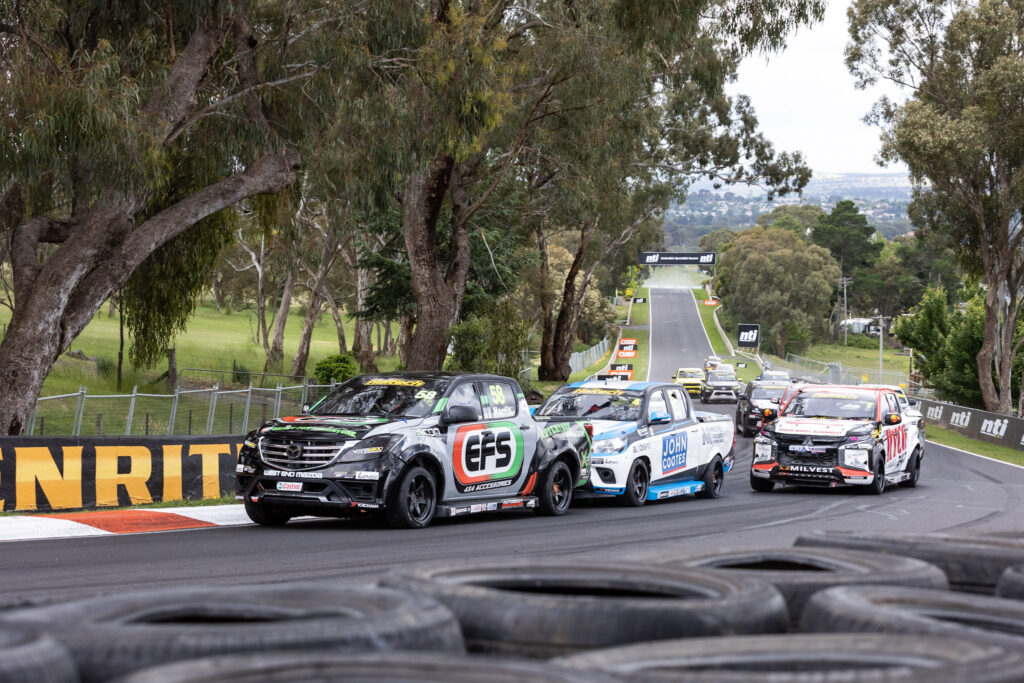 As the Repco Bathurst 1000 prepares to bid farewell to the Holden brand this weekend, it sits 1-2 at the top of the Haltech V8 SuperUte Series entering the penultimate round at the iconic Mount Panorama circuit.

Following strong runs at Wanneroo and Winton, Aaron Borg in the ACDelco Colorado holds a 43-point advantage ahead of fellow Holden contender George Gutierrez in his Go Sunny Solar entry after he finished his home event at The Bend Motorsport Park in third.

Behind the two Holdens, a trio of Toyotas follow headed by early series leader Craig Woods in his Western Sydney Motorsport Hilux, who is equal on points with the Abcor Racing example of Rohan Barry 33-points adrift of Gutierrez.

In turn, Fat Freddy’s Lager has expanded its support to become a series sponsor for the final two rounds at Bathurst and the Gold Coast.

In other big news to emerge ahead of Bathurst, category stalwart Craig Dontas announced his retirement from driving although he is aiming to install a rookie in his Ryco 24.7 Racing Mitsubishi Triton next year.

Entering Bathurst with a rich vein of form is Sieders Racing Team’s David Sieders, who is making up for lost time after missing the opening round to sit seventh in the standings coming off an event win and a second.

The ever improving Dave Casey will hope to continue his development in the Bendix Racing Isuzu D-Max, which is in contrast to Richard Mork, who is a previous starter in the 1000 and will again race around the Mountain in the City Rural Insurance Brokers Mazda BT-50.

Dean Brooking has demonstrated frontrunning pace this season, but luck hasn’t been on his side as he hopes to progress at Bathurst in the Gates JKD Racing Team Toyota Hilux.

Rounding out the 14-ute field are Craig Jenner in the second Mazda, the Best Leisure Industries Mitsubishi of Ellexandra Best and the returning Jaiden Maggs in the World’s Best Technology Triton, while father Gerard will continue in the sister Ford Ranger.

In an exciting addition to the weekend schedule – dependant on wet weather – teams will battle each other against the clock in Haltech Pit Stop Challenge, with all fans welcome to watch on Friday at 2:00pm-3:00pm.

Also, the winner of our ‘Ultimate SuperUtes SuperFan Competition’ Lachlan Moult alongside his eight-year-old daughter will attend Bathurst as part of his prize this weekend.

“I love the utes and always have because of the exciting racing they’ve always had,” said Moult. “And the V8 sound is just awesome!

“I’ve followed the Sieders family since I was a kid living in South Windsor and would hang out at their workshop and loved the old M.A.N race trucks. I haven’t been to Bathurst for years but always love watching the SuperUtes on TV at every round. I’m looking forward to getting up close and personal with these cool cars and meeting some of the guys and girls making it happen.”

The Haltech V8 SuperUtes Series begins its Bathurst campaign at 7:55am AEDT Thursday.