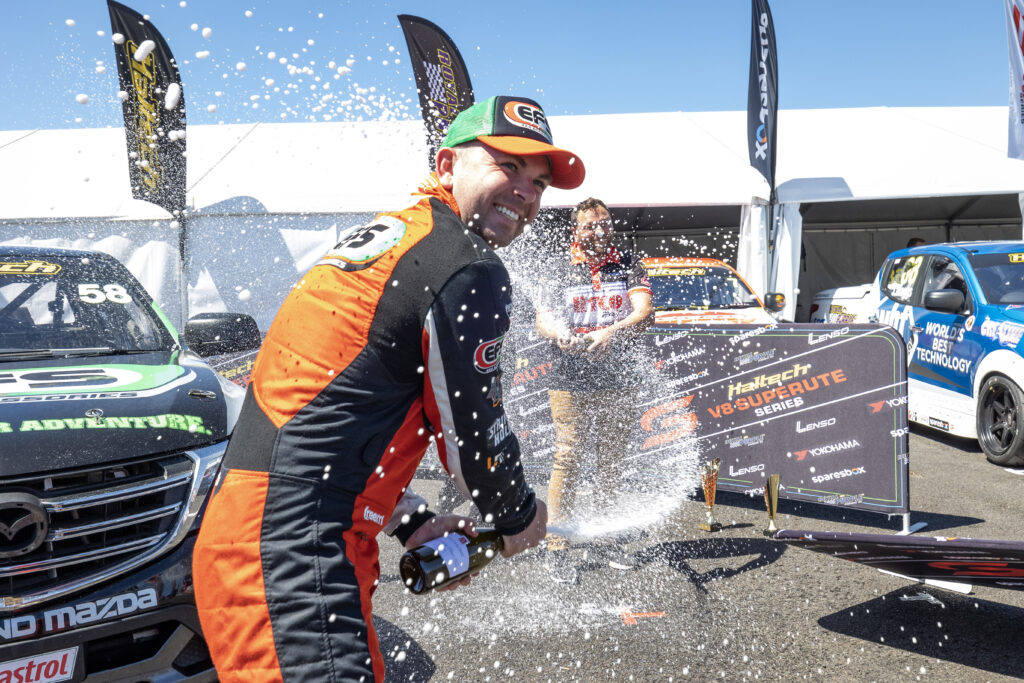 Reigning Haltech V8 SuperUtes Series champion Ryal “The Kid” Harris will make a one-off racing cameo this weekend, October 28-30, as the series gets set to crown a new title-winner on the streets of Surfers Paradise.

The 37-year-old from the Gold Coast will race the #1 Super Butcher Ford Ranger, taking the place of Sieders Racing Team regular Gerard Maggs who has drafted the experienced steerer to help set up the Ranger for next season.

“I’m very excited to be back, I love racing around the Gold Coast track, it’s my home round and I’ve had a lot of success at this event over the years but running #1 is an added bonus,” said Harris. “Racing in front of family and friends as well as all my amazing sponsors gives me an extra bit of drive to do well and repay them for the support.”

Since winning the 2021 SuperUtes title, Harris has been competing in the Dunlop Super2 Series, where he currently sits 14th outright for Matt Stone Racing with three top-10 race finishes so far this year.

The reigning SuperUtes champ says that despite not being a series regular nowadays, the unforgiving streets of the Gold Coast will ensure he approaches the event with utmost respect considering a championship is also at stake.

“You can’t overdrive this circuit because if you overshoot a corner you are either in the wall on exit, or doing a flick turn in the run off,” explained Harris. “Calculated risk is the trick to getting around this track fast. You don’t have to brush up walls and pin the mirrors back to get the best lap time. Just nail the back chicane and flow the car through the slower stuff and you will do well.

“I’m so thankful for Gerard [Maggs] for giving me the keys to his rig. I’ve been trying for months to get a seat for this round so I will do all I can to get the SuperUte set up nicely for him in preparation for 2023,” said Harris.

Starting off in karts on the Gold Coast at the age of 11, Harris was a regular winner on the local circuit with 14 state and national karting titles by the age of 16. Harris made his debut in the V8 Utes Racing Series in 2004, claimed by back-to-back titles in 2012 and 2013 plus a third title in 2015.

Switching to SuperUtes in a Peters Motorsport Mazda BT-50 in 2018, he won his first title at the Newcastle finale, followed by wrapping up last season’s championship in first at Mount Panorama, Bathurst. His last outing at the Gold Coast street circuit was back in 2019 where he scored a race win and runner-up race results for Peters Motorsport.

The final round of the 2022 Haltech V8 SuperUte Series will run on the streets of Surfers Paradise this week, October 28-30, as part of the Boost Mobile Gold Coast 500 event for the Repco Supercars Championship. First practice starts on Friday morning.