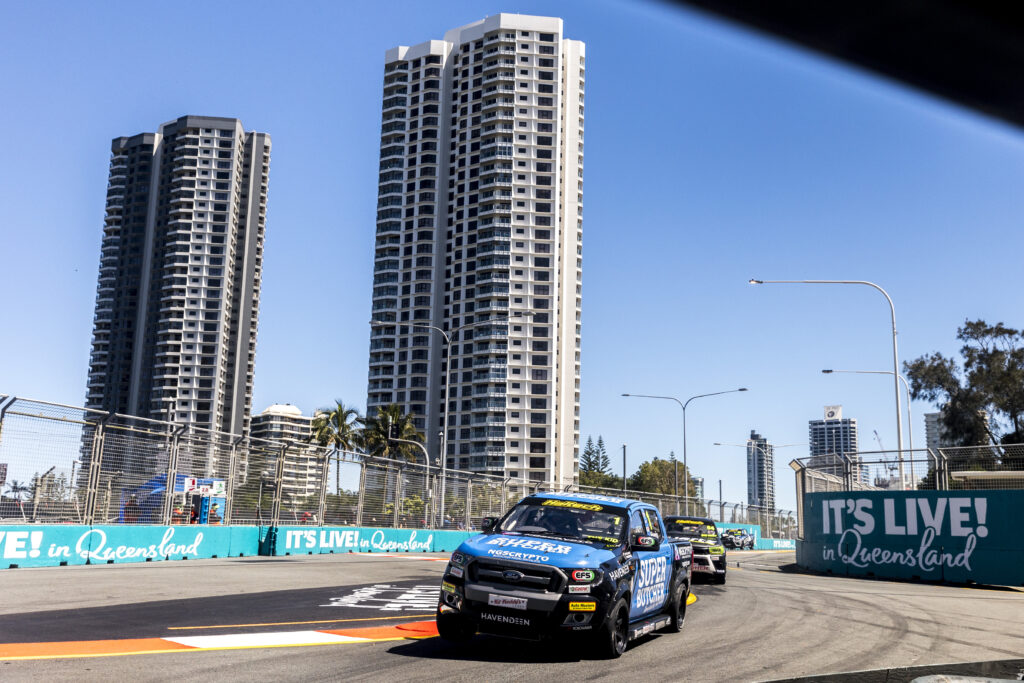 Reigning series winner and returnee Ryal “The Kid” Harris has won the opening encounter for the Haltech V8 SuperUtes Series on the Gold Coast.

Harris charged his way to the win from Craig “Big Sexy” Woods in the Western Sydney Motorsport Toyota Hilux as he enhanced his title chances, finishing ahead of current series leader Aaron “A A Ron” Borg.

The Super Butcher Ford Ranger of Harris started third, but methodically progressed to the lead, first disposing of David “Sideways” Sieders in the Sieders Racing Team Mitsubishi Triton, before moving into the lead soon after.

Borg had held the lead since the start, but Harris completed a clean overtake at Turn 4, while the series leader was demoted to third as title rival Woods repeated the pass on the final lap.

Behind, Sieders was unable to make in roads on the leading trio as he finished fourth with the fastest lap of the race as behind Rohan “Silver Fox” Barry finished fifth in the Abcor Racing Toyota Hilux after making a late race pass on Go Sunny Solar’s George “El Gringo” Gutierrez in his Holden Colorado.

Harry “Styles” Gray made the best start of the field, but had nowhere to go due to the tight confines of the Gold Coast circuit, while he also straight lined the opening chicane in the Ryco 24.7 Racing Mitsubishi Triton to recover to seventh.

Richard “Grey Gonads” Mork was next in the City Rural Insurance Brokers Mazda BT-50 ahead of Ellexandra “NotZak” Best driving the Best Leisure Industries Triton as Chris “Jazz Hands” Formosa’s Allgate Motorsport Ford Ranger and Dean “The Professor” Brooking failed to finish, the latter after crashing at the approach to Turn 1.

The Haltech V8 SuperUtes Series continues its final round with Race 2 at 12:25pm AEST (1:25pm AEDT).