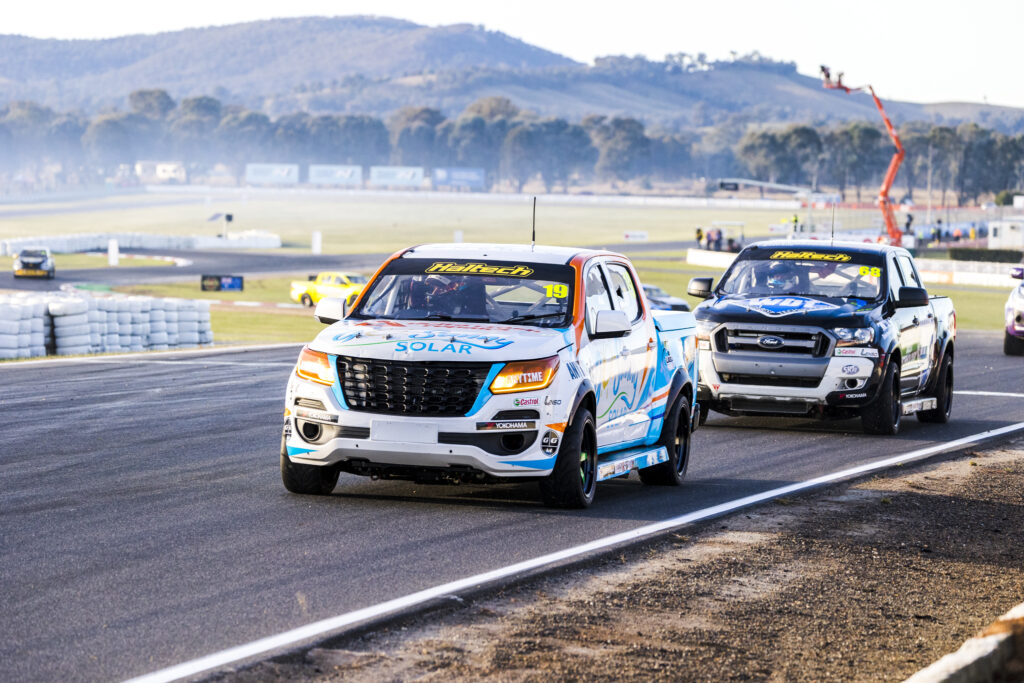 A steady and consistent approach has aided to build George Gutierrez’s title campaign at the midway point of the 2022 Haltech V8 SuperUte Series.

The South Australian continued to build upon the gains made in the opening two rounds to finish to secure top three finishes in all four races during the most recent round at Winton.

In doing so, Gutierrez took his first round podium of the season by finishing third, but more importantly he now sits second in the title standings.

It wasn’t an entirely a fault free weekend for the Go Sunny Solar backed Holden Colorado as an alternator failure following an engine change after the Perth round put Gutierrez on the back foot as he lost valuable track time in practice at a track he’d never raced at before.

But he was able to adapt quickly and rebound to set the fourth fastest time in qualifying, securing a second row start for the first race.

The 25-year-old went on challenge the leaders in finishing third in Saturday’s opening race. He backed it up with a strong drive in the reverse grid second race to make his way through the field to finish runner up, before taking third in both of Sunday’s races to round out the weekend.

“What a weekend it was for us at Winton,” said Gutierrez after the weekend.

“We walked away finishing inside the top 3 all weekend with three thirds and a second. Giving us third overall for the round and most importantly P2 for the championship!

“We even set the fast lap in two of the races.

“I honestly don’t think it has sunk in yet! I am well aware of the achievement that it is, but the focus automatically goes towards the next round.”

“There is still such a long way to go in the year and so much work still to be done.”

With the title firmly in his focus, Gutierrez’s attention has already turned to the next round of the series, his home round at The Bend Motorsport Park, as he praised his team for its performance during the Winton weekend.

“A massive thank you again to my team,” said Gutierrez.

“We had to put in a few long days to get to Winton after having to do an engine swap following the round Perth.

“That put us under the pump coming here this weekend with the short turnaround.

“But now we have a bit of time to reset and get prepared for our home race at The Bend in late July.

“I really have to thank all my sponsors for their continued support. We wouldn’t be here without them.”