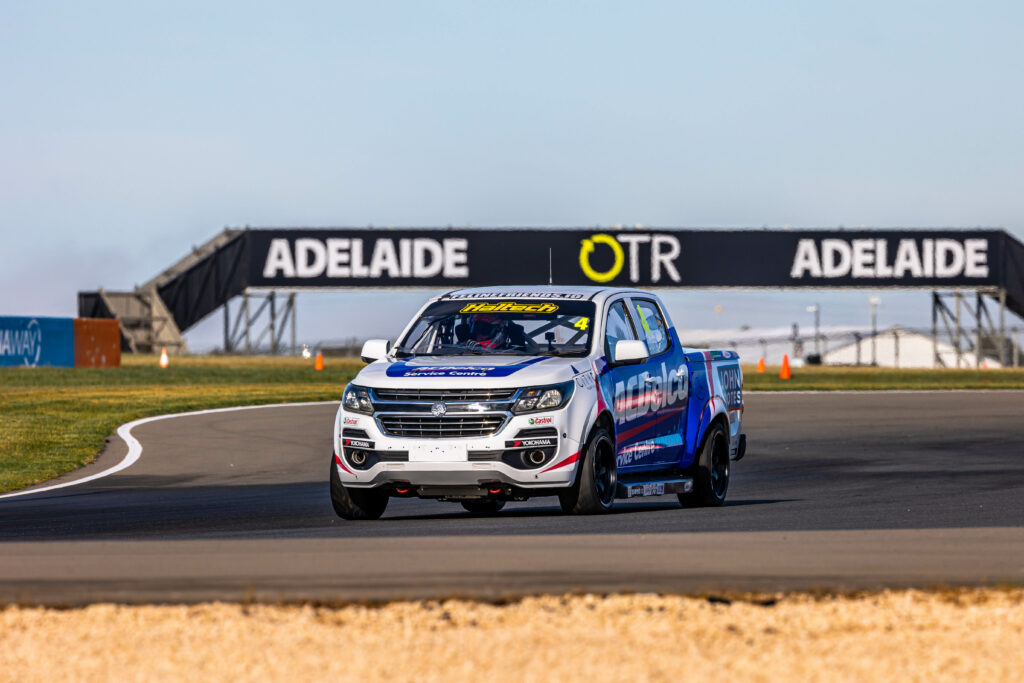 A charging drive from Aaron Borg has given the series leader victory in the final race of Round 4 for the Haltech V8 SuperUtes at The Bend Motorsport Park.

Coming from 15th on the grid, Borg scythed his way through the field in the opening two laps to set-up victory from round winner Adam Marjoram in the Ryco 24.7 Mitsubishi Triton and hometown racer George Gutierrez in the Go Sunny Solar Holden Colorado.

It was an equal start for the first few moments before Sieders began to build an advantage entering Turn 1 clear of the battle for second won out by Marjoram despite the West Sydney Motorsport Toyota Hilux of Ben Walsh making a big challenge for the lead.

Despite his unrewarded charge in Race 3 earlier today, Borg repeated the feat as he climbed from 15th to eighth on the opening lap, before moving to fourth on the next.

By lap 2, the weather was having an impact as rain began to fall as Sieders continued to lead by 0.547s clear of Marjoram, while the Go Sunny Solar Holden Colorado of George Gutierrez was determined in third.

Walsh dropped out after the wiper blade hit the kill switch, with the Hilux not re-firing.

Marjoram snatched the lead as the field crossed to complete lap 3, with Sieders valiantly holding onto second from the Walsh’s teammate Craig Woods and Borg in the ACDelco Holden Colorado.

A freight train of six led by Sieders in second were being left behind by Marjoram.

The first challenge to Sieders was made by Woods, but he out braked himself at Turn 1 as Borg took advantage to take second exiting the opening corner. Woods re-emerged in sixth behind rookie Ryan Gilroy in the Sieders Racing Team Ford Ranger as Borg left the quintet behind.

Gutierrez was next to make a move at Turn 6, successfully taking Sieders in the following complex of corners as Allgate Motorsport’s Chris Formosa also started to buy in driving the Ford Ranger.

Borg was continuing to make in-roads on Marjoram and caught the Ryco 24.7 Mitsubishi Triton very quickly to execute a successful pass for the lead at Turn 13 on the second last lap.

Meanwhile, Sieders dropped behind Woods, Gilroy and Formosa as the Sieders Racing Team Mitsubishi Triton began to fall into the clutches of Abcor Racing driver Rohan Barry in the Toyota Hilux.

Borg held on to complete a stunning come back drive to lead Marjoram across the line as Gutierrez completed the podium at his home event.

Behind, Woods led Gilroy and Barry in what was a last gasp charge, with Sieders just edging Formosa for seventh.

Second secured the round on debut for Marjoram, who acted as sub for the recovering Craig Dontas.

Now there is a bit of a break before the Haltech V8 SuperUtes Series continues at Mount Panorama supporting the Bathurst 1000 on October 7-9.