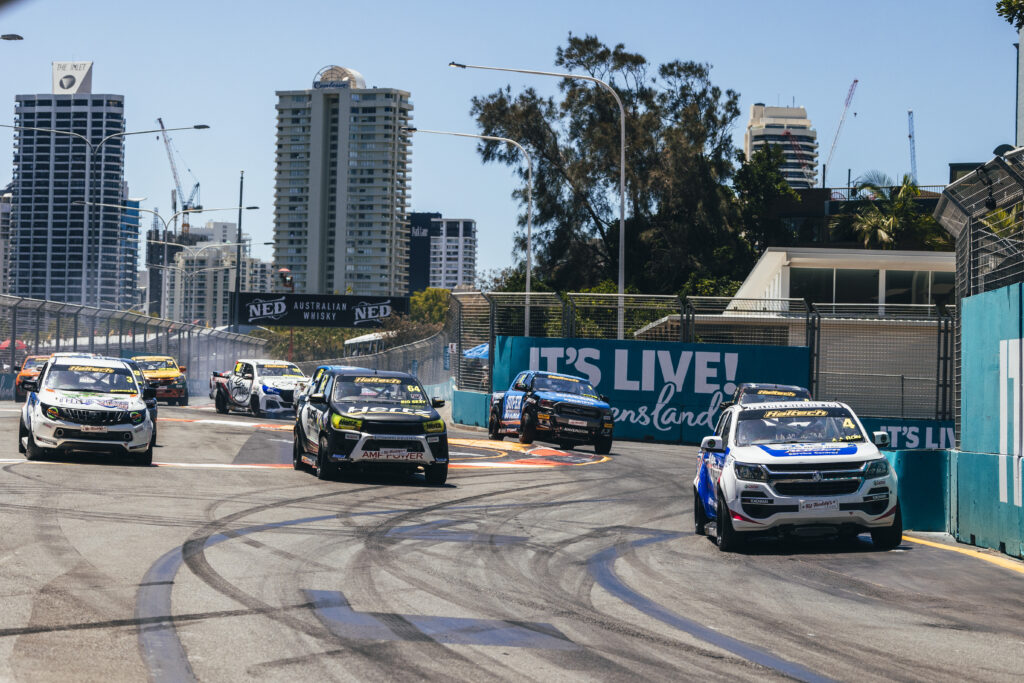 Three out of four as Ryal Harris secures round on return

A race full of drama has completed the 2022 Haltech V8 SuperUtes season as reigning series winner Ryal “The Kid” Harris completed the perfect cameo performance by securing the final race and round victory on the Gold Coast.

Harris made a good jump off the line, but the Super Butcher Ford Ranger slowed dropping him to fifth entering Turn 1 and giving series winner Aaron “A A Ron” Borg a margin heading into the opening chicane.

Dean “The Professor” Brooking in the Gates JKD Racing Team Toyota Hilux made the best start, but went a bit early and he was handed a 5s post-race penalty.

Harris began his charge back by passing the Abcor Racing Hilux of Rohan “Silver Fox” Barry to tag onto the battle for second between the Sieders Racing Team Mitsubishi Triton of David “Sideways” Sieders and Craig “Big Sexy” Woods in his Western Sydney Motorsport Toyota Hilux.

Behind, Barry tapped Ben “The Jet” Walsh into a spin at the opening chicane as it capped off a disappointing weekend for the Fat Freddy’s Lager Hilux driver after recovering from an off in Race 1.

Continuing his charge, Harris got through on Sieders as in front Woods locked up entering the opening chicane and spun Borg around. The ACDelco Sieders Racing Team Holden Colorado began to recover for fourth, then parked with damage to the front of his Holden Colorado at Turn 11 after hitting the wall exiting the back chicane.

Woods led, but 10s were added to his time post-race due to the incident with Borg giving Harris his third victory of the weekend in a starring cameo performance as Sieders took second, while the Western Sydney Motorsport driver dropped to third in the end.

Brooking was the last finisher in 12th after his penalty, while George “El Gringo” Gutierrez failed to make the finish as the Go Sunny Solar Holden Colorado stopped entering pit lane.

Ellexandra “NotZak” Best failed to make it out in her Best Leisure Industries Mitsubishi Triton following the accident damage in Race 3.

Harris in turn wins the round from Sieders and Woods, however results remain provisional at this stage.

This marks the end of the Haltech V8 SuperUtes Series for 2022, we’ll be back for a bigger and better campaign next year. Keep an eye on our website during the off-season for all the latest news and information.