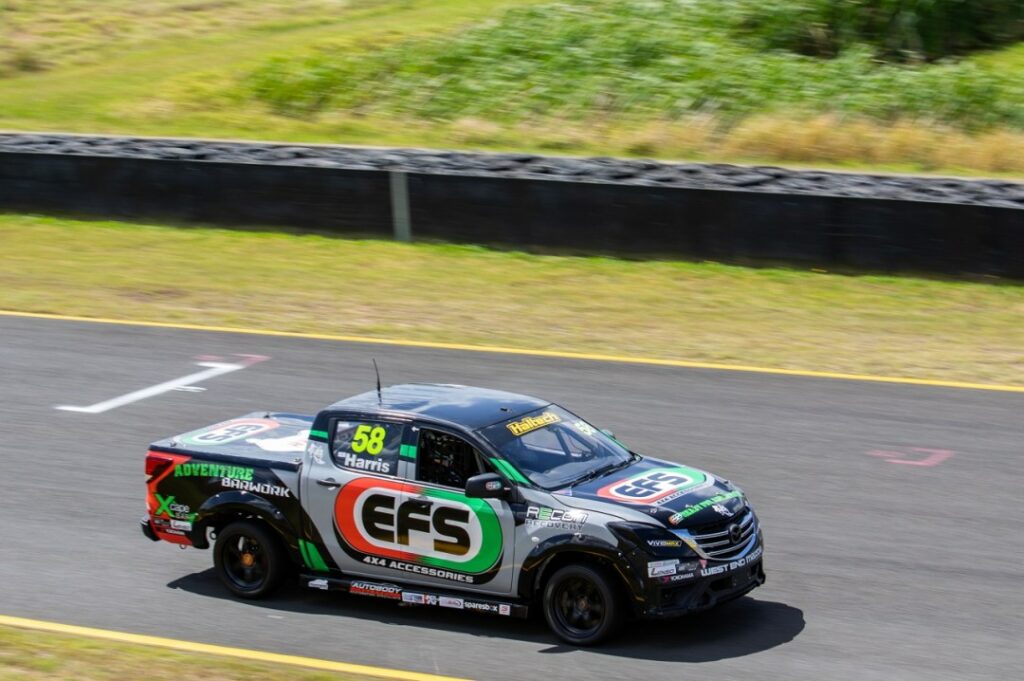 Haltech V8 SuperUte Series leader Ryal Harris has set the pace in today’s practice sessions for round two at Sydney Motorsport Park, in the first official outing for the category since May.

Harris was only fifth-fastest in the opening session, but made a significant improvement in the second session to top the timesheets in his Mazda BT50, ahead of the Toyota Hiluxes of Aaron Borg and Craig Woods.

“We didn’t expect much today – we were running on really old tyres and we haven’t done much testing in the lead-up to this weekend, so to end up fastest for the day was a pleasant surprise,” Harris said.

“Rod (Dawson) gave the car a tune-up between sessions and in the second session, I was among some of the quicker guys so I had something to chase.

“It was very windy today and there was a massive head-wind on the main straight, so the slipstream was very effective.”

Borg, who trails Harris by just four points in the standings, said today’s track conditions were a challenge.

“It was really hot and windy today, and I think I just needed to find a bit more consistency from myself – fortunately, tomorrow is going to be much cooler,” Borg said.

Woods is expecting tyre management to play a factor throughout the rest of the weekend.

“Tyre degradation will be massive. In qualifying, it will be critical to nail your flying lap and in the races, it will be all about tyre conservation. The round winner will be the person who conserves their tyres the best,” Wood predicted.

David Sieders was fourth for the day ahead of SuperUtes debutant Matt McLean, who suffered a loose gear shift assembly.

Cameron Crick also missed the second practice session due to a gearbox problem in opening practice, but the problem has been resolved and Crick will be back on track tomorrow. SuperUtes qualifying commences at 2:00pm AEDT tomorrow, with Race 1 at 5:35pm.