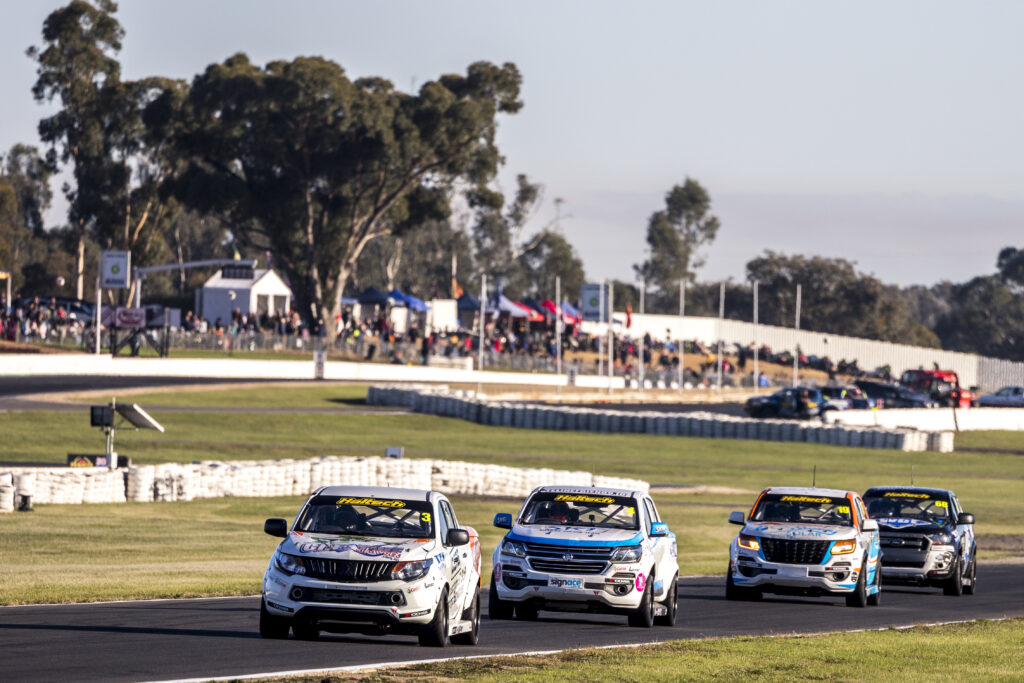 David Sieders has completed a hat-trick of wins as he took both Sunday races during Round 3 of the Haltech V8 SuperUtes Series at Winton.

The full grid contested the final race of the weekend after this morning’s incident, which was a credit to the Sieders Racing Team to affect the repairs swiftly.

David Sieders again won the start in his Sieders Racing Team Mitsubishi Triton, but just like in the previous races stablemate Aaron Borg was providing the pressure in his Holden Colorado.

The Go Sunny Solar Holden Colorado of George Gutierrez was also in touch as he enjoyed a consistent weekend and was targeting a podium clean-sweep.

Out in front, Sieders was controlling the pace in front ahead of Borg as Gutierrez moved closer, with Gerard Maggs enjoying a successful return to the category driving the World’s Best Technology Ford Ranger.

However, late race pressure from Western Sydney Motorsport’s Craig Woods was increasing for Maggs and he was forced into a mistake exiting Turn 3. Running wide, Maggs came back onto the circuit in front of Woods, with the former series leader unable to avoid launching his Hilux into the air.

Both managed to finish the race, with Woods ninth and Maggs 11th.

In the end, Sieders took his third victory of the weekend by 1.697s from Borg, Gutierrez, Barry and Ryco 24.7’s Craig Dontas in his Mitsubishi Triton in what was a great result after the incident this morning.

Rounding out the top 10 were Walsh, Jaidan Maggs, Casey, Woods and Best.

Richard Mork was the only other finisher after a tough weekend in his Mazda BT-50, while the similarly mounted Craig Jenner failed to finish, as did Brooking.